Air Stair Millionaires
By Sam Longo AME A&P
Boeings B727 “Whisperjet” was a watershed aircraft, introduced after its tried and true B707. With strong sales, over 1800 were manufactured between 1963 and 1984.The Company incorporated many innovative concepts into its winning design. With three Pratt and Whitney JT8D’s adorning its tail and its APU nestled neatly between the main gear wheel wells, the trailing end of the fuselage allowed room for the first retractable aft “air stair”. The airline operators loved the design allowing passenger to board without the aid of additional airport equipment, especially handy at smaller airports. In fact, during the early 1970’s a number of very entrepreneurial, gutsy passengers made the 727 their unequivocal aircraft of choice!
On November 24, 1971, in Portland Oregon, one such passenger, Dan Cooper was the last person to purchase a ticket on Flight 305 bound for Seattle Washington. Before he paid his $20 for the one way ticket he asked the agent to confirm that the Northwest Orient flight was flying a Boeing 727. With no other luggage he grabbed his briefcase and climbed aboard. It was a light load with 36 passengers and 6 crew members, so he settled himself into one of the aft seats closest to the rear door.
Once airborne he passed the flight attendant a note indicating that he had a bomb in his briefcase and was high jacking the aircraft. He demanded $200,000.00, two parachutes and a refueling truck ready to meet them in Seattle. In exchange he would release all passengers. The aircraft circled for a few hours while the FBI and Northwest Orient scrambled to meet his requests. The plane landed, the money and parachutes were supplied and the passengers released. After refueling, he kept one Flight Attendant and three Flight Crew members on board. The plane then departed south, destination Mexico.
Using the inflight interphone, he gave the pilots specific flight instructions, 15 degrees of flap, with gear down, maintaining 10,000 feet, without pressurizing the cabin. This made for a very slow airspeed (approx. 120 MPH) and high rate of fuel burn. After a quick lesson from the flight attendant on how to operate the aft air stair, he sent her forward to the cockpit. At around 8pm, somewhere over the wilds of Washington State, the flight crew saw the aft air stair “open light” illuminate. With the money tied around his waist (1.16 million in 2014 dollars) he jumped into the cold (-57 degree C) stormy night sky and vanished forever. The legend of D.B. Cooper had begun, and with it the floodgates of 727 “skyjacking” was opened wide.
The following April, Richard McCoy Jr. a former Army Green Beret, successfully sky-jacked a United 727 and bailed out over Utah with $500,000 in ransom money. He was arrested two days later after landing safely. With the new “Air Piracy” laws freshly minted he just missed the death penalty and got 45 years in prison. After escaping from prison three years later he was killed in a gun battle with authorities.
In all, a total of 15 “copycat” hijackings similar to Cooper’s were attempted with varying degrees of success in 1972 alone. All were killed or captured except for D.B. Cooper. The other 16 hijackings in that year were almost all diversions to Cuba.
The Cooper incident and others like it that year marked the beginning of baggage and carry on checks, thus ending the carefree aircraft boarding some of us may still remember. In 1973 the FAA made searching bags and passengers mandatory. In addition, the FAA required all Boeing 727’s to be retro-fitted with a “weather vane” type device that would not allow the door to open in flight, subsequently named the “Cooper vane”.
As for the legend of D.B. Cooper, despite an exhaustive investigation the case remains the only unsolved sky piracy case in aviation history. Only two pieces of concrete evidence were ever found in the large potential drop zone. In 1978 a hunter found a placard containing instructions for lowering the aft air stairs of a 727 near Castle Rock, Washington. Then in February of 1980 an eight-year-old boy, Brian Ingram, uncovered three packets of partially decomposed money in the sand banks of the Columbia River, 14 km downstream of Vancouver, Washington. These packets of $20 bills had the serial numbers verifying them as Cooper’s ransom money, totalling $5,800.00.
Even young Brian never quite became a millionaire. In 1986 after lengthy negotiations the recovered bills were divided between Ingram and Northwest Orient’s insurer. In 2008 Brian Ingram sold fifteen of his bills at auction for $37,000. The Northwest Orient 727 “N467US” changed hands a few times and was unceremoniously scrapped in 1996 for parts in a Memphis boneyard.
As for Mr. Cooper, his fate remains a mystery. Did he perish that dark, stormy night in 1971 or is there a very old man in a rocking chair somewhere reading this column, quietly praising the qualities of Boeings 727 with a wry, wrinkled smile on his wind weathered face?
For more published writing by Sam Longo go to http://www.samlongo.com 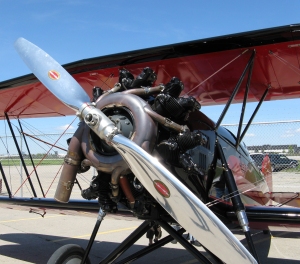 Whirling Wonders
By Sam Longo AME A&P
I vividly recall my first class in Propeller Theory. Mr. Urch, our stalwart Aircraft Maintenance Professor posed a seemingly simple technical question to our group. “What is the purpose of the propeller?” All the keeners raised their hands and one responded with the appropriate response “to provide thrust, Sir.” Wrong, bellowed our wise instructor; “Its function is to keep the pilot cool… just watch him sweat if it ever stops!”
Perspiring pilots aside, the aircraft propeller is a complex whirling wonder that has evolved over the history of aviation to match and enhance the improvements in engines and airframes. Early attempts at propeller construction were crudely twisted metal akin to lawn mower blades bent to angles based more on whim and luck than science.
The Wright brothers figured out early on after testing wings in their makeshift wind tunnel, that propellers must follow the same concepts as airfoils. They were greatly disappointed to find very little concrete scientific data even when they researched marine propellers and so the seemingly black art of propeller design began.
With a wing or airfoil, efficient lift requires a somewhat narrow angle of attack (the angle in which the leading edge meets the airflow). This optimum angle can be controlled by the pitch inputs the pilot chooses with his control column. Too much angle and the wing stalls destroying the lift and potentially the aircraft! Propellers however live in a much more complex combination and variation of airflows. Simply put, the speed of the rotating propeller blade creates one angle of attack and the forward speed of the aircraft creates another variable angle. The resultant vector angle is constantly changing with engine speed and aircraft speed.
Add to all this that blade tip speeds must be kept to subsonic speeds requiring a constraining check of blade length and max rpm. This in turn requires relatively low prop rpm (max 2500, give or take) and/or multiple shorter blades and the whole scenario becomes an engineering whirling dervish!
The bottom line is that even a modern well engineered wooden or metal, fixed-pitch-propeller is a compromise by its very design. Ideally an aircraft would like a finer pitch for take-off and climb and a coarser pitch for cruise flight. Once the pioneers figured this out many weird and wonderful moveable pitch propellers began to appear, some more successful than others.
Hamilton Standards solution was simple and elegant. Their two position counterweight propellers were a revolution. Engine oil pressure drove the blades to fine pitch and counterweights drove the blades to coarse pitch. By controlling the oil flow to the propeller via a selector valve the pilot now had the best of both worlds. Add to this the ability to fine tune the high and low pitch stops within the counterweights and it was propeller bliss.
The Second World War was a watershed for aviation design. The large radials and high horsepower V-12 engines required a more sophisticated solution to greater thrust and faster aircraft speeds. The Constant Speed propeller was the next logical step. By using a governor to sense engine rpm the prop could now maintain a large variation of blade angles constantly changing to optimise aircraft performance. In essence it was akin to moving from a car with a two speed manual transmission to one with a modern CVT.
Again Hamilton Standard produced the state of the art Hydromatic Propeller. Using a governor with boosted oil pressure working against the constant of engine oil pressure within its instantly recognized metal dome, it was reliable and efficient with the added benefit of feathering the propeller in flight. A feature that saved many air crews lives while returning from bombing runs with damaged aircraft and engines out of service.
The Hydromatic became the propeller of choice when hostilities ended and the golden age of piston powered airliners began and flourished. Its roots and concepts soldier on today with state of the art composite blade propellers mated to modern turbo prop aircraft. While high bypass turbine engines reign supreme at high altitudes for long transcontinental flights, turbine driven propeller aircraft still rule the low to medium altitude skies. They are also more efficient at slowing an aircraft on landing roll with the use of reverse pitch, another modern propeller enhancement that greatly improves STOL performance.
Propeller technology continues to improve. Just as in the latest airframes, modern composite materials are making them lighter, quieter and more efficient. Evolution is a wonderful thing, which brings to mind another propeller memory from my early days at Nordair.
As a young apprentice mechanic, I was getting an FH227 ready for departure at a gate at Dorval Airport. Its Rolls Royce Dart engines and large Dowty Rotol propellers were notoriously noisy as many regular passengers knew. The ear-bleeding, high pitched whine of the props at takeoff rpm could be quite uncomfortable. As the passengers filed past me on the open tarmac one of them begged to purchase my ear defenders. Unfortunately for him, I declined.
Fast forward to today, as a modern Bombardier Q-400 climbs skyward from Toronto’s Island Airport, its passengers are barely aware of the rubber band-quiet composite propellers churning away just outside their window. A testament to how good they have become and yet another technology that modern travellers quietly take for granted.
For more published writing by Sam Longo go to http://www.samlongo.com