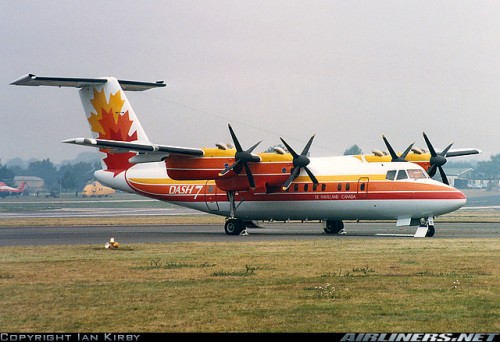 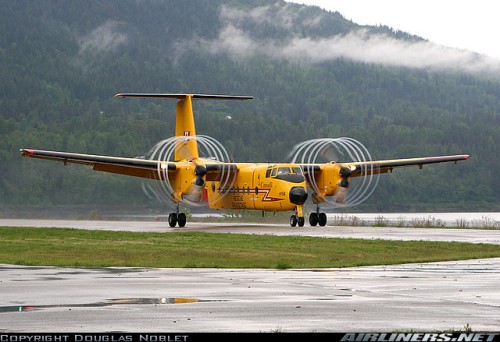 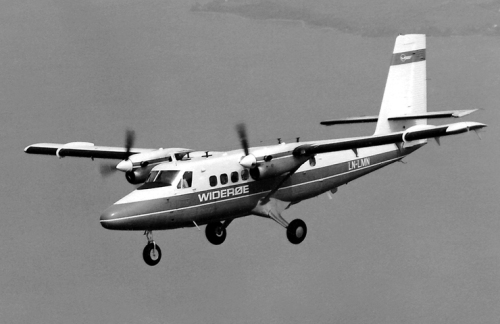 Of the six apprentices hired, three of us were left. More than a year had passed working for Nordair and I really missed my life back in Toronto. Although I had learned a lot and progressed as a mechanic, it was time for a change. I tendered my resignation, sent my belongings back to Toronto and gave myself a week off. I climbed into my 1974 MGB, bid Dorval adieu and top down, took the scenic route home.

When I returned to Toronto, the word was out that DeHavilland was hiring. I made a call and the following Monday morning had an interview. I wasn’t sure what to expect. When I arrived an older gentleman with a British accent read my resume and then dumped a bag of aircraft hardware on to the table. “Identify six of these items” he said. I spread them out with my hand, and starting with the easiest, gave it my best shot”Lets see, a cleco, AN470 rivet, AN426 rivet, MS nut, cherry lock, anchor nut.” “Okay, that’s fine” he said: “now take a look at this blueprint” I spread it out, answered two pretty basic questions about dimensions and then he packed it all up. “Can you start tomorrow?” I was in shock, “Sure” was all I said and that was it. All of seven minutes and I had a job in Sub-Assembly for considerably more than I had made at Nordair. Wow, steady days with weekends off and more money. Life was good!

DeHavilland was a unique aircraft manufacturer. They made a large percentage of their sub-assemblies in house. Up on the sprawling second floor of the hangar was the “sweat box” so named for the 110 degree heat endured during the summer months. I was shown to my workbench and issued an air drill and rivet gun. So began the first stage of my employment. The foreman assigned you a parts batch and a blueprint and away you went.

At that time the company was booming, turning out Twin Otters, Buffalos and just starting the Dash 7. The subassembly jobs were very diverse: fiberglass wingtips, rudder pedal assemblies, leather control yoke covers, flap torque tubes, the list was endless. You would make a batch of ten or twelve, turn them over to the inspector and start the next job. In the beginning it was interesting. As time progressed however it soon became tedious working in the same spot, day after day, with the foreman constantly keeping tabs on your performance. I had to stay for a minimum of three months before I could bid on another position. I set my sights on the Dash 7 assembly line.

The Dash 7 was DeHavilland Canada’s first pressurized aircraft, with STOL performance and four Pratt & Whitney PT6-50 turbo prop engines. It was a beautiful design and is still one of my favorites. The assembly line was in its early stages with aircraft one and two slated for the “Iron Bird”, a hydraulic contraption designed to flex and stress airframe and wings to their limits. For the next six months, I worked the line installing control pedestals, riveting airframes, rigging controls and installing components. This was more like it, now at least I was working on a whole airplane.

When each airplane got to Test Flight, we turned it over moved back and started again. Test Flight now became my new goal. I started bidding and before long secured a spot as an Airframe Mechanic. Now the job got really interesting. All three types came to us now and after the initial test flight, we worked out all the snags. A few more flights, customer delivery inspection and away they went. Many of those aircraft are still in service all over the globe.

We worked hard when the aircraft passed through, but even with three types there were lulls with little to do. You had to keep busy so we always had “G-Jobs” stashed in our toolboxes. The “G” was short for Government. These non-DeHavilland projects could range from personal hobbies to making tools and everything in between. Some pretty bizarre things were manufactured. The talent, skill and resourcefulness of my co-workers never failed to amaze me. Some of the projects that come to mind: an aluminum 14 quart oil pan for a 69 Chevy, complete aluminum tool boxes, custom hunting knives, hydraulic line wrenches and my personal favorite, a highly detailed Darth Vader costume!

Speaking of interesting G-Jobs, a good friend of mine had cut his finger quite badly with a band saw. His right hand while bandaged was useless. His biggest frustration was the inability to hold the stick shift to change gears while driving. DeHavilland G-Jobs to the rescue! I fabricated a lovely aluminum device that strapped to his forearm with Velcro, with a cushioned socket under his palm. We unscrewed the car’s shift knob and with the socket engaged on the shaft he was happily mobile again. I wouldn’t want to guess what that cost DeHavilland in manhours, but the company could rest assured that it was manufactured to an airworthy standard!

I now had enough time and experience to write my AME license, but I just couldn’t bring myself to hit the books. My next dream job was the Holy Grail at DH, Flight Service Mechanic. Few got the job and most were licensed AME’s. Twice I put in the paperwork and twice I was passed over. It was clear, to move ahead, I had to have that license.

Right around this time the union was getting restless. Contract negotiations were nearing and the company had been stockpiling aircraft. Officially we went on strike. In reality, when you considered the sub-standard wage offer, it was a three-and-a-half month lock out. I was out of work. I sold my car (kept my motorcycle!) and decided to take the time to write my Transport Canada License. I gave myself three weeks to study, one week for each exam, Engine, Airframe and Air Regulations. I was nervous and unsure, so I studied hard and tested myself over and over. One by one I passed each on the first attempt. Finally in October 1978, I made the grade. AME License YZM229959 was issued. I was no longer “just” an apprentice.

When the strike ended and I returned to work, I tried one more time for that Flight Service job. Now with license in hand, I thought sure I would get it. For the third time I was passed over, it just wasn’t meant to be. Once again it was time to move on.

What lessons were realized from my work at DeHavilland? First, there is valuable insight into how an aircraft really works, when you have the opportunity to build it from the subassemblies right up to the major structures. I believe it made me a better AME. Second, with the right attitude, you can turn life’s negative circumstances into positive ones. Being out of work ultimately gave me the opportunity to obtain my license, one of the most significant events in my life. Finally, always strive to improve. Change what you can and when you can’t, have the wisdom to move on. That final rejection for Flight Service Mechanic forced me to shift my focus. Air Canada became the next brass ring.

A tiny house, a sloping floor

The scent of pine and food galore

A growing family, hers to please

Children playing at their feet

A Christmas tree with bubbling lights

Aunts and Uncles, cousins too

Arrive in groups and fill the rooms

Grandma’s hugs are what we seek

“Cabella” and a pinch of cheek

We have a drink, laugh and sing

We talk of life and everything

We dearly miss those who have gone

And cherish more, those who live on

For forty-six years, I came to meet

My family clan on Clinton Street

To all that loved her, family, friend’s,

She has passed onan era ends

Dedicated to the memory of Anna Longo